Past NHCA President, John Ayers requested 15 minutes to speak. It was granted
• New Bay Bridge Crossing from Baltimore County to Kent County. He believes it will effect all Dundalk residents due to the proposed location.
• http://marylandreporter.com/2016/09/29/how-about-a-third-bay-bridge-from-baltimore-co-into-kent-co/
• Presidential candidate Trump wants to build a casino / hotel / cruise ships nearby
• Potential of expanding our harbor depths so larger ships may dock (Tradepoint Atlantic?)
• Governor Hogan is working on on an underground railway from Downtown to the Eastern Shore

Went over minutes from months meeting.

Delegate Bob Long stopped in.
• He will be having a meeting Monday, Oct. 17 2016 at the North Point Library – Someone from Homeland Security will be there. He gave us his office number.
• See attached flyer.
• Wants to keep Ft. Howard medical center for Veterans

Past NHCA President Buzzy Stockman spoke
• DVD’s for vets! Bring any DVD’s you would like to donate to the veterans at Ft. Howard
• Knights of Columbus will be selling cards for active military serving over seas which can be filled out, then sent to them by Knights of Columbus. ($12.50 for 22 cards) Deadline Nov. 27, 2016
• Lawn clippings can be put only in a CLEAR bag if outside of trashcan 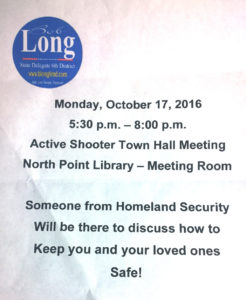 7:01 PM meeting starts with the pledge of allegiance.

Police Community Relations Councils hold meetings The second Monday of every month at 7 PM and they are open to the public.

An amendment was made and passed about renters being allowed to become members, and able to hold officers positions and allowed to pay dues to our association. No one opposed.

A member stated that he got 12 Flyers in six days. Wanted to know what could be done to prevent the waste of paper.

Barry is supposed to meet with code enforcement people for trash day sweep.

Yard sale is scheduled for October 1st. (But was cancelled due to rain. Rain date is October 8th)

A great American community organization for Dundalk and the Southeastern area of Baltimore County, Maryland.